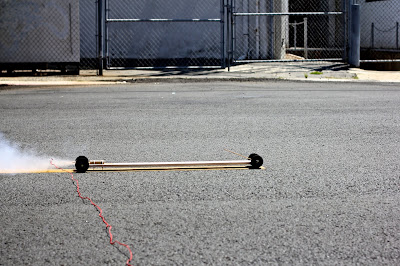 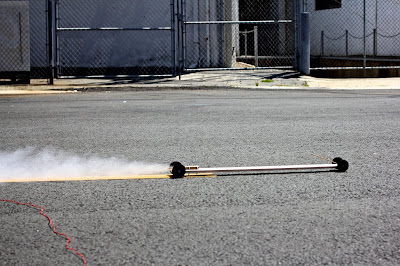 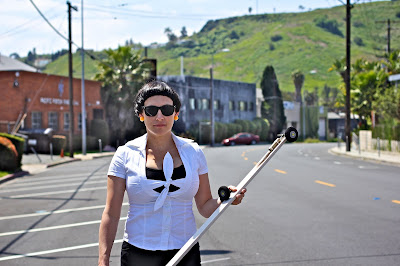 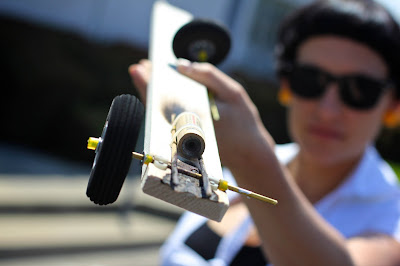 The Winner:  Inspired by the amount of incense available in Venice Beach the Nag Champ lit it's own sticks as it sped to victory. The long wheel base is basically the secret as usual. Good weight too. Both the LAPD and the LAFD drove past and we were thankful they didn't smell the unique mixture of rocket smoke and nag champa incense.
Being away from the safety of Sydney Rocketcar Day you forget how important it is to find a cul de sac (not too much traffic, particularly LAPD) flat road (not to much camber) and shade (it was pretty hot on the street).
Posted by mook at 11:08 PM 2 comments 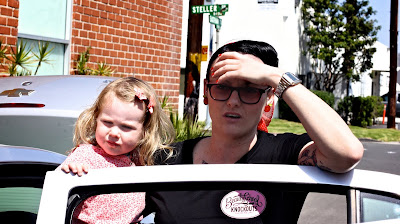 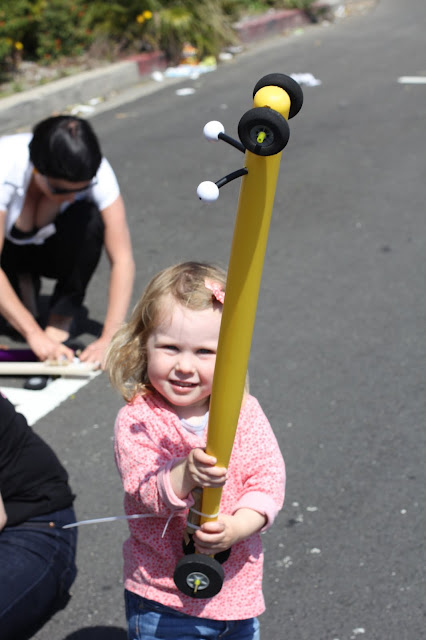 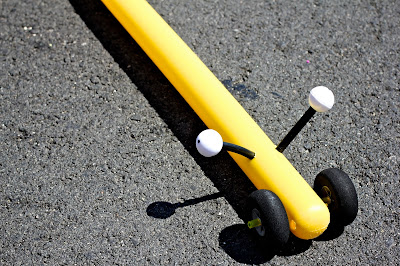 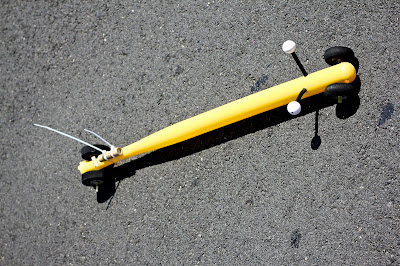 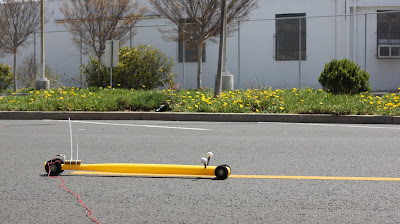 (Baseball) Bat Car. Scarlett (2.25 years old) and her first car. Because someone didn't attach the rocket engine well enough, when it crashed, the engine flew onto the roof of the factory next door.
Posted by mook at 10:55 PM 2 comments 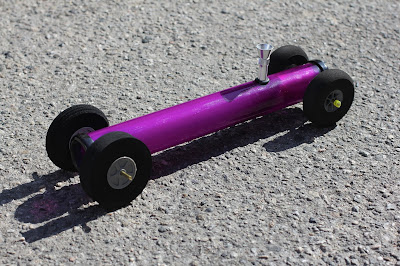 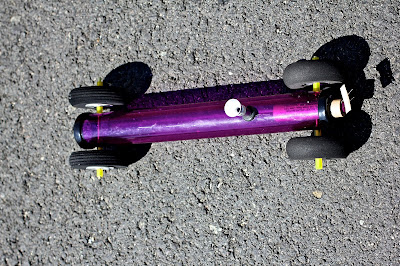 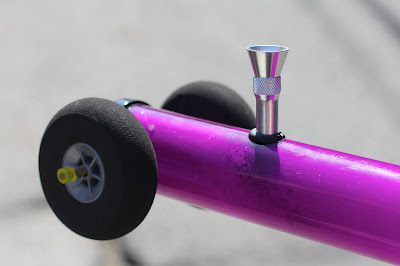 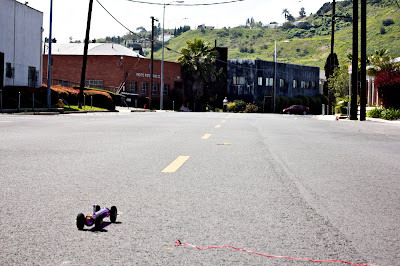 The Flying Bong
In honour of staying in Venice Beach, the Flying Bong car. Rocket smoke would have drifted up through the cone after it's final blast. It didn't go so well. maybe a drogue would have helped.
Posted by mook at 10:48 PM 2 comments

Races are run individually to work out which car gets the farthest. Once they're done, we do a multicar race because it's so nuts.

This is a multicar race: 6 x the doom!

Here's an article about the event from the Sydney Morning Herald. It's been going for about 10 years now and is well attended.
Posted by mook at 3:29 PM 1 comments

Email ThisBlogThis!Share to TwitterShare to FacebookShare to Pinterest
Who Wins?
The car that travels the farthest wins.

General: while you can make anykind of car, sticking wheels onto a rocket will incurr some sort of shame demerit. Similarly, sticking a rocket onto a car is equally subject to frowning.
Materials: Whatever, In the interest of safety please ensure that metal components are kept to a minimum and as safe as possible.

Weight: avoid very light cars. they are prone to spin around and shoot into the spectators and innocent bystanders.

Body shapes: The event demands something interesting to look at and shapes aimed at aerodynamics solely will be poo-pooed somehow. Formula One style, saloon car, land speed record types, all types welcome. Plus anything new you can come up with. You have to make your own chassis.

Motor types: C size rockets only in the race. Whatever the delay you like. C6 rockets seem to be cool. Only one motor to be used. No clustering or staging. You can buy them from hobby shops if you look trust worthy (swarthy types, trim beards first). These fit into a Romeo y Julieta no 3 cigar case nicely.

Wheels: Three at least but more are permissible and all must be in contact with the ground on the start line and every effort must be made to keep all on the ground during the run. A car, which is bouncing and/or whose wheels are leaving contact with the track too much, at the judges discretion, will be banned. The wheels can be inside or outside of the car body. The car must end up on all 4 wheels.

testing: You can learn alot about how good your theories regarding rocketcar design are from watching your creation pickup and fly out of contol towards someone. if you can : test your car. That said, there are 2 race categories. one for tested cars and one for first run cars.

Remote Control : is not allowed due to it working one year.

Gyroscopic control : is allowed due to it never having worked yet.
Posted by mook at 2:54 PM 0 comments

Looking for a venue

Requirements: Away from people. Flat and smooth (a closed off or dead-end road, a drain maybe, an airstrip). Please throw in ideas so we can check 'em out.
Posted by mook at 2:37 PM 19 comments

This is a collection of launches in slow motion from Rocketcar Day 11.
Things to spot apart from how great slow motion is.
- pipe car: engine a bit low so it makes it rear up. Wheels a bit wobbly but good soft rubber helps it hang onto the road
- brain car : was going pretty well but i think too short. 6 wheels didn't seem to hurt it though, maybe helped it stay straigther for longer.
- pipe car 2 : this was basically the same car as the first one but was a bit lighter due to having a smaller driver. Same engine position, interesting how much more flippy it was
- spinning trebuchet of doom: obviously, don't do this. Amazing in slow motion though.
- london bus: engine too far above wheel base. Obviously the lid flying off into the crowd not a good vibe.
- recorder car: pretty good but too short. Maybe if it had a drogue, it wouldn't have been spun around before it got going.
- long black car : This in theory should have been good. It had the length, but i suspect the engine direction did not equal the wheel/chassis direction
I think the basics are still true. It's a balance of:
- car needs to be straight
- the engine / thrust vector needs to be in line with the wheel base
- the wheels should be oiled and soft to cope with the road bumps
- point your car straight to start with (watch out for the road camber)
- a drogue helps stopping the car spin before it gets momentum up

Amidst the smoke and the sound and the stink of rocketcars veering off course and racing into the crowd, sometimes you miss the poetry of these little cars. Comparatively Huge engines strapped onto tiny, malaligned experiments of cars leads to fantastic drama: this video breaks down just what type. Respect.

(also thanks to daniel heckenberg for the slow-mo-arama)
Posted by mook at 1:30 PM 1 comments

Rocketcar POV. Note how it runs into the crowd.

Taken from a camera mounted on one of the cars. This was the race where someone got pretty badly burnt on the foot. I couldn't see it, but apparently you can see the moment of impact if you go frame by frame. But look at those people run! Thanks Toby
Posted by mook at 12:29 PM 1 comments

Rocketcar Day is an event where people make and race little cars powered with rocket engines. You're encouraged to combine your incredible creative flair with a desire to see your car go as far and as awesomely as possible.

When is Rocketcar Day LA?

Away from people.
Flat and smooth (a closed off or dead-end road, a drain maybe, an airstrip).
Not too far away
send ideas to me hello@rocketcarday.com